Bollywood actress Kangana Ranaut too to social media to share that she has been through a tough time. The actress has claimed that she is the highest tax paying actress in the country but she was unable to pay half of her last year’s tax because of ‘no work’. Although, she added that she doesn’t have any qualms if the government charging interest on the pending amount.

Sharing a post on her Instagram story, Kangana wrote, “Even though I come under highest tax slab pay almost 45 percent of my income as tax, even though I am the highest tax paying actress but because of no work haven’t paid half of my last year’s tax yet, first time in my life.”

“I am late in paying tax but the government is charging me interest on that pending tax money, still I welcome this move.” Ending her post on a positive note, Kangana wrote, “Time could be tough for us individually but together we are tougher than the time,” she added. 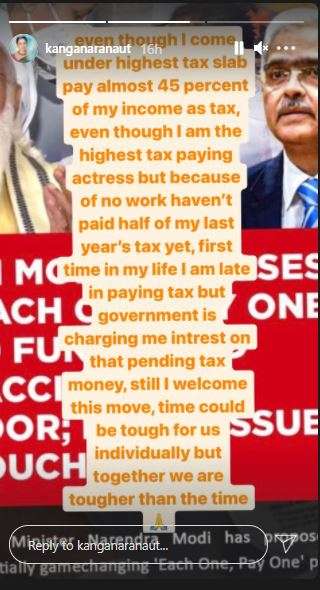 Earlier this month, on the onset of June, Kangana shared that has ushered happy feelings, sparkling thoughts and new ideas compared to the tired and agitated feeling she had throughout the last two months.

“Who all can feel a sudden gush of happy feelings, sparkling thoughts and new ideas with the beginning of June? There is a massive shift in how agitated and tired I felt through all of April and May. I am hopeful that this fizzy sparkling feeling will sustain…” Kangana posted on her Instagram Story.

“Most challenging during Covid was the isolation, it was lovely meeting friends and relatives today in Manali, going to meet grandmaa tom in Mandi,” Kangana had captioned the photographs.

On the work front, Kangana has multiple films in her kitty. She has Thalaivi, Tejas, Manikarnika Returns: The Legend Of Didda, Dhaakad to look forward to.