Actor turned film critic Kamaal R Khan aka KRK on Friday reacted to Mika Singh’s diss track on him. The track ‘KRK Kutta’ was released by Mika on YouTube with the singer hurling abuses at KRK. The singer claimed that the song is meant to be a “befitting reply” to KRK, in the context of the latter’s ongoing tussle with Bollywood star Salman Khan. The song has been sung by Mika while Shaarib Toshi have composed the track. Video features the general public with a cameo by Vindu Dara Singh.

Taking to his Twitter, Mika shared the track and wrote “Guys The most awaited song of the year #Krkkutta #Barkingdog is OUTNOW Music by @toshisabri @shaaribsabri. My beta @kamaalrkhan please give ur genuine reviews I have really worked hard on this song. “

Reacting to Mika Singh’s diss track, Kamaal R Khan (KRK) tweeted, “I have watched the song of #Mika about me. I am thankful to him for making it. I am thankful to bookie (as per Mumbai police record) #VinduDaraSingh also for featuring in the song. I am thankful to #MeToo master #ToshiShabri for giving music. Now wait for my videos about all of them.” 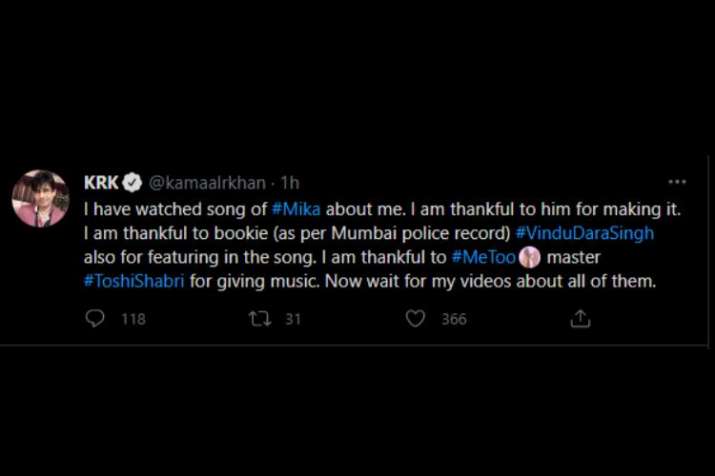 Earlier, singer Mika Singh announced that he will make a new single titled “KRK Kutta”, claiming the song meant to be a “befitting reply” to him. He said, “KRK is a ‘gadha’. Salman Khan should have filed the case on him a long time ago. KRK intentionally says nasty stuff to get attention, so that he keeps getting publicity. He makes personal attacks, he starts attacking family members. This is wrong. He talks absolute garbage, starts abusing people, he just says anything to anyone and the entire entertainment industry is silent. Someone needs to give him a proper reply,” claimed Mika, justifying his song.

Meanwhile, Salman Khan filed an application before a court demanding that contempt action be initiated against actor Kamaal R Khan for continuing to make defamatory remarks despite an undertaking not to do so. The application was submitted in a defamation suit filed by Salman seeking to restrain Kamaal R Khan from directly or indirectly making and uploading videos or any other content on the actor, his business ventures and films/projects.

However KRK claimed that Salman had filed a defamation complaint against him over the his review of the just-released Hindi film ‘Radhe’.