Actress Anushka Sharma, who has accompanied her cricketer husband Virat Kohli for World Test Championship final against New Zealand has been keeping her fans updated about her trip to Southampton. From sharing random click on the way to giving a glimpse of the stadium, the actress has been giving a sneak peek of the tournament to her fans. On Thursday night, she took to her Instagram Stories and gave a glimpse of her meal, as she enjoyed a game of cricket on the television. “Tea and scones on a rainy English summer day,” she wrote over the image.

Meanwhile, Dhanashree Verma, who has also accompanied Yuzvendra Chahal showered praise on Anushka during an Ask Me Anything session on Instagram. When a user asked her about Anushka, Dhanashree shared a boomerang video of them with their husbands and wrote, “Extremely sweet, warm and a genuine person.” 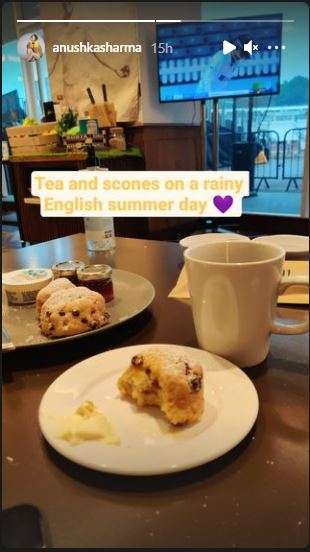 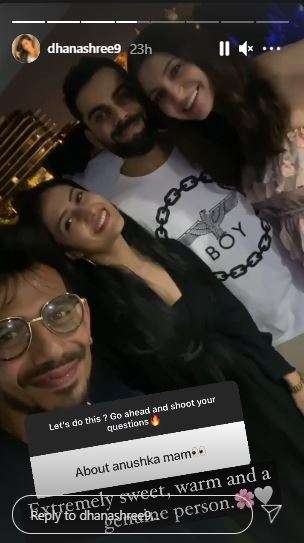 Meanwhile, ahead of the match, Anushka treated her fans with some “random photos”  from the Ageas Bowl, the venue of the WTC finals.  She took to Instagram to share a series of black-and-white pictures, “A ‘take random photos and think of a quirky caption kind of post’,” she captioned her pictures.

In the pictures, Anushka Sharma is seen wearing a baggy shirt, paired with cropped denim and white sneakers. She tied her hair into a bun.

Also, Virat and Anushka have been gaining praise from all corners for helping to raise funds for a noble cause. The couple has saved the life of a child by collecting Rs 16 crore. A child named Ayaansh Gupta had a disease called SMA (spinal muscular atrophy). A very expensive medicine was needed for the treatment of Ayaansh, which is worth about Rs 16 crores. To raise funds for the treatment, his parents created a Twitter account under the name ‘AyaanshFightsSMA’.