Bollywood actress Kangana Ranaut opened up about experiencing negative feelings amid her on going passport renewal row.  She had a sinking feeling as if she was ‘stuck at a dead end’. Kangana’s plea seeking renewal of her passport has been adjourned by the court till June 25. A bench of Justices PB Varale and SP Tavade adjourned the hearing after noting that the ‘Queen’ actress had failed to implead the Passport Authority as a party in the case. However, the feeling disappeared on Friday when she could once again feel the magic around her.

Sharing a screenshot of her Koo post on Instagram Stories, Kangana wrote, “Everyone falls in to the trap of despair, yesterday I had a sinking feeling seemed as if I was stuck at a dead end, felt anxious and agitated but I knew I was wrong and not able to see the magic that’s unfolding around me, my pain was real so was the love that was there all along but suddenly seems to have disappeared, this morning in a flash I was dazzled with all that which had left me, TRUST.” The actress concluded the post with heart emoji. 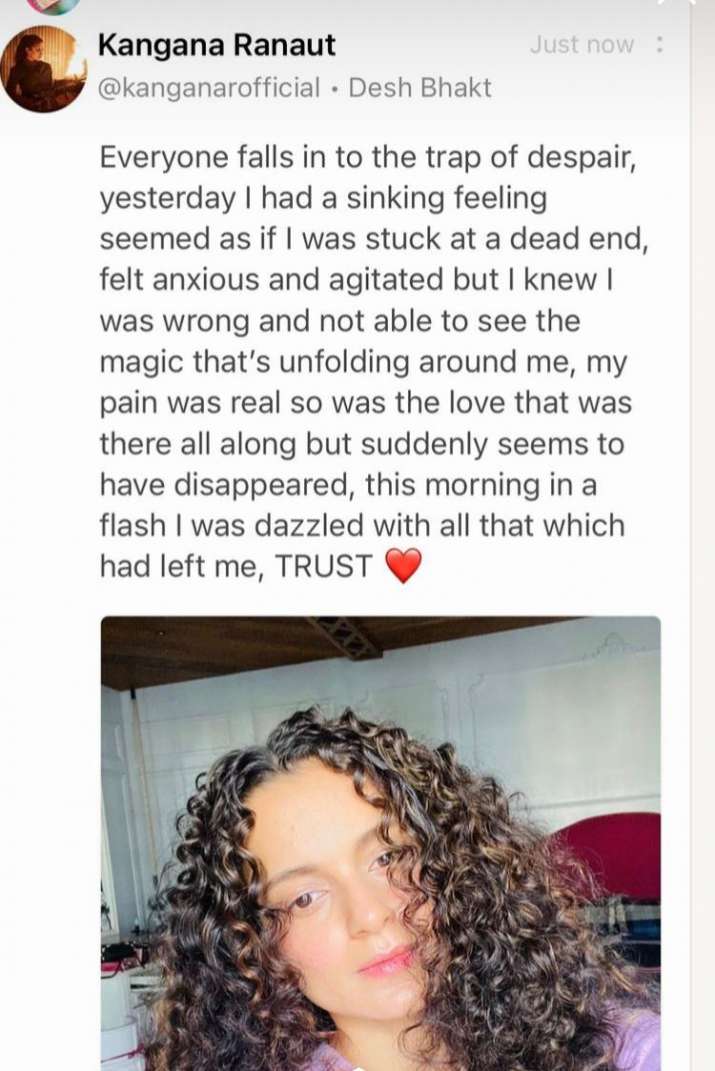 Kangana had moved to the Bombay High Court seeking permission to get her passport renewed as it expires on September 15 and she has to travel for a film shoot. The actress filed an application saying she needed to travel to Budapest this month for the shooting of ‘Dhakkad’ and thus, needed her passport renewed.

On the professional front, Kangana who recently recovered from novel coronavirus is awaiting the release of her multilingual biographical film “Thalaivi” which was postponed due to the surge in COVID-19 cases in India. Directed by Vijay and written by KV Vijayendra Prasad, the movie is about the life of J Jayalalithaa, former Tamil Nadu CM and actor was gearing to release theatrically on April 23.

She will also be seen in “Tejas” and actioner “Dhaakad”, while “Manikarnika Returns: The Legend Of Didda” and a film on former Prime Minister Indira Gandhi are in the pipeline.

Also Read: KRK addresses Kangana Ranaut as ‘deedi’ in new tweet, slams ‘idiots’ for pointing out he is older