Actors Pooja Hegde and Allu Arjun-starrer ‘Duvvada Jagannadham’ has recently completed four years of its release. Recalling working on the Telugu project, Pooja took to Instagram Story and wrote: “4 years and a couple of blockbusters later, still my dad’s favourite film of mine! #4YearsofDJ.” Along with it, she posted a throwback picture of her with the ‘DJ’ team. 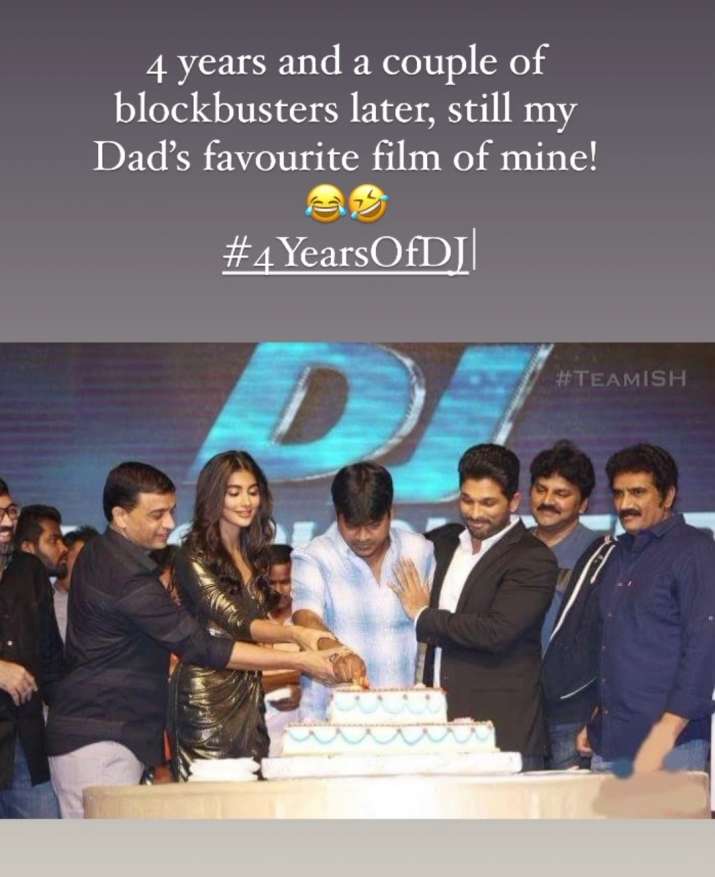 Director Harish Shankar recalled the memories of his directorial venture and thanked the whole team for their support by sharing a series of stills from the promotions of the film.

Sharing the pics, Harish Shankar wrote, ”Million thanks to @alluarjun gaaru @SVC_official & My sir ji @ThisIsDSP had a great time and always cherish #DJ one of the biggest blockbusters of my career … my wholehearted thanks to @hegdepooja @actorsubbaraju & #Raoramesh gaaru !!!.”

Released in 2017, the film was helmed by director Harish Shankar. A day ago, he also celebrated the fourth anniversary of the film.

“Million thanks to @alluarjun gaaru @SVC_official & My sir ji @ThisIsDSP had a great time and always cherish #DJ one of the biggest blockbusters of my career … my whole hearted thanks to @hegdepooja @actorsubbaraju and #Raoramesh gaaru,” Harish Shankar tweeted.

Harish Shankar also thanked Allu Arjun for introducing director of photography Ayananka Bose to him. Sharing a pic with the DOP, he wrote, ”My sincere thanks to @alluarjun sir for introducing me to @DoP_Bose and the journey is still going on with this genius cinematographer … thanks a ton Bose ji for always being with me.”

Speaking of Pooja’s upcoming films, she will be seen sharing screen space with Prabhas in ‘Radhe Shyam’ and playing the character of Prerana, which is a period romantic drama. The film is directed by Radha Krishna Kumar. Bhagyashree, Sachin Khedekar, Priyadarshi Pulikonda, Murli Sharma, Kunaal Roy Kapur, Riddhi Kumar, Sasha Chettri and Sathyan, among others, will be seen in pivotal roles.