Shanaya Kapoor has called mom-daughter duos to start a conversation around dating. To begin with, she took it upon herself to give every one an example of how to do this new challenge. Taking to her Instagram stories, the aspiring actress shared a screenshot where a user asked her mom about how she’ll describe her daughter to someone she might like.

The text reads, “Loves her phone. Wakes up at 1PM. But very thoughtful and caring.” Responding to the answer, Shanaya tells how her mom, Maheep, will asnwer the question. She says, “My mom doesn’t miss a chance to mention my sleep schedule. But she always balances it off. As people on the Internet say- She attacks, she protects but she also got your back.” 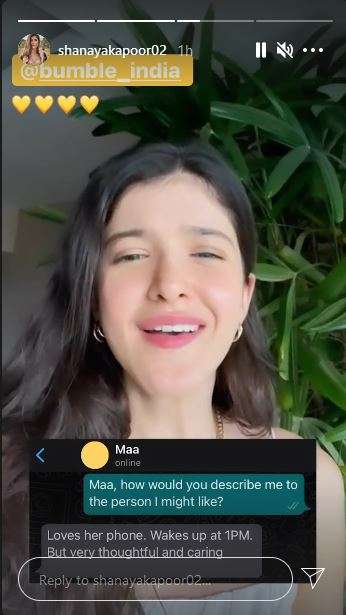 For the unversed, celebrity mom, Maheep Kapoor, is teaming up with her daughter, Shanaya Kapoor, to share tips and tricks on how to Bumble better, and talk about their dating experiences as we navigate dating in 2021. When asked about dating advice she has given to Shanaya, Maheep said, “My only advice which is to the point is ‘always find a friend in your significant other’”.

Maheep claims to be highly supportive of Shanaya’s dating journey, “I want Shanaya to tell me everything; I want to be friends with my kids. I think all parents should take this approach with their kids. Things are already tough out there, and it’s important for children to know you have their back.”

Meanwhile, Shanaya is all set to make her acting debut with Karan Johar‘s upcoming production.