After actress Kangana Ranaut was banned on Twitter, the actress often takes to Instagram Stories to share her opinion about current topics. The actress on Tuesday said from ancient times, kings have disguised themselves to know about ‘antisocial elements’. She also cited an example from the Ramayana. The actress also clarified that she’s not talking about the alleged spyware Pegasus which is claimed to have private phones of selected people in the country.

“Even in ancient times greatest kings used to disguise and secretly visit the remotest parts of their country, people and their homes to know to hear what their subjects talking or discussing, this exercise is a part of administration, biggest example is in Ramayana, during one such visit lord Rama got to know about Maa Sita’s perception among general people when he heard them secretly,” she wrote.

“No big deal if the king wants to know about antisocial element’s whereabouts or general issues of people and their mindset ….it is his right, prerogative and business to keep his eyes and ears open…. So hyenas stop crying foul and No I am not talking about #pegasus Ha ha ha,” she added. 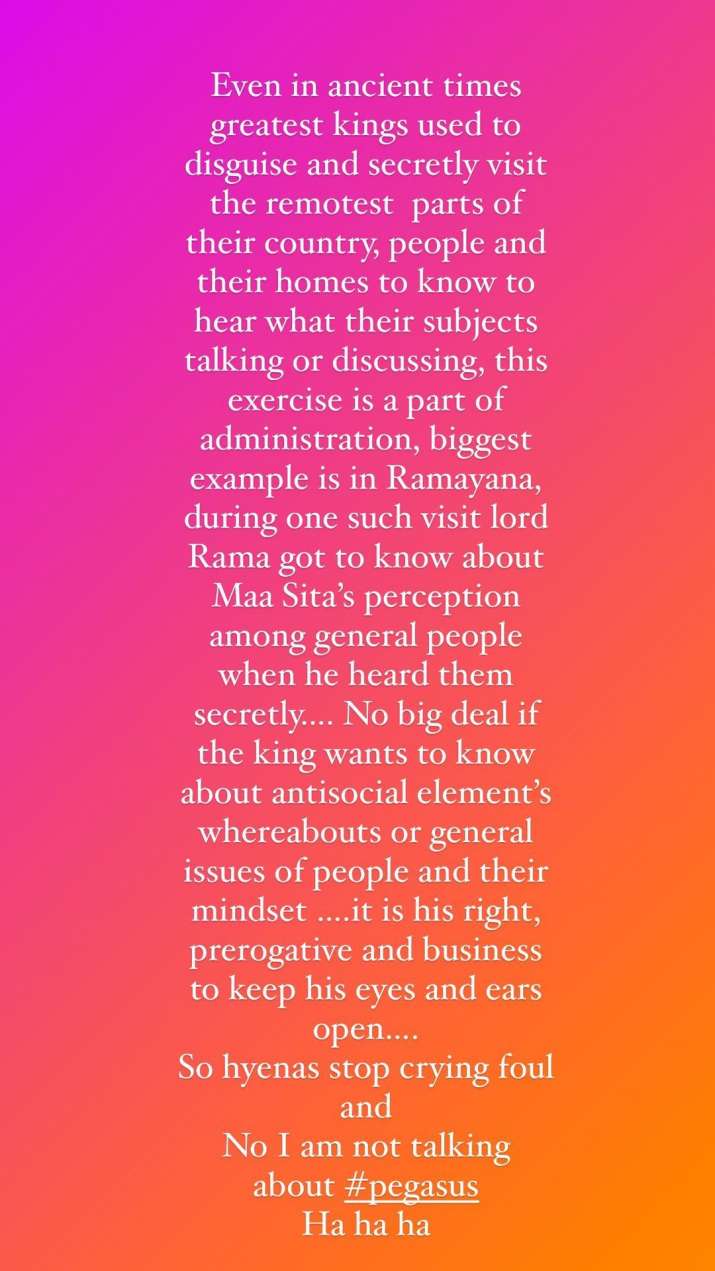 For the unversed, The Wire on Sunday reported that over 40 journalists, three major opposition figures, one constitutional authority, two serving ministers in the Narendra Modi government, current and former heads and officials of security organisations and scores of business persons in the snooping database.

What is Pegasus? Pegasus is a malware that infects iPhones and Android devices. It allows its users to pull messages, photos and emails, record calls and activate microphones. The Washington Post reports that 189 journalists, more than 600 politicians and government officials and more than 60 business executives were targeted by clients of NSO Group, a hacker-for-hire headquartered in Israel.

Coming back to Kangana Ranaut, the actress looks forward to the release of her upcoming film Dhaakad, which also stars Arjun Rampal. She also has films such as “Thalaivi”, period drama “Manikarnika Returns: The Legend Of Didda” and “Tejas” in the pipeline.

Kangana will also don the Director’s hat for the second time for “Emergency”, based on the life of late Indian Prime Minister Indira Gandhi.